Residents In Memory Salteña – In Memory 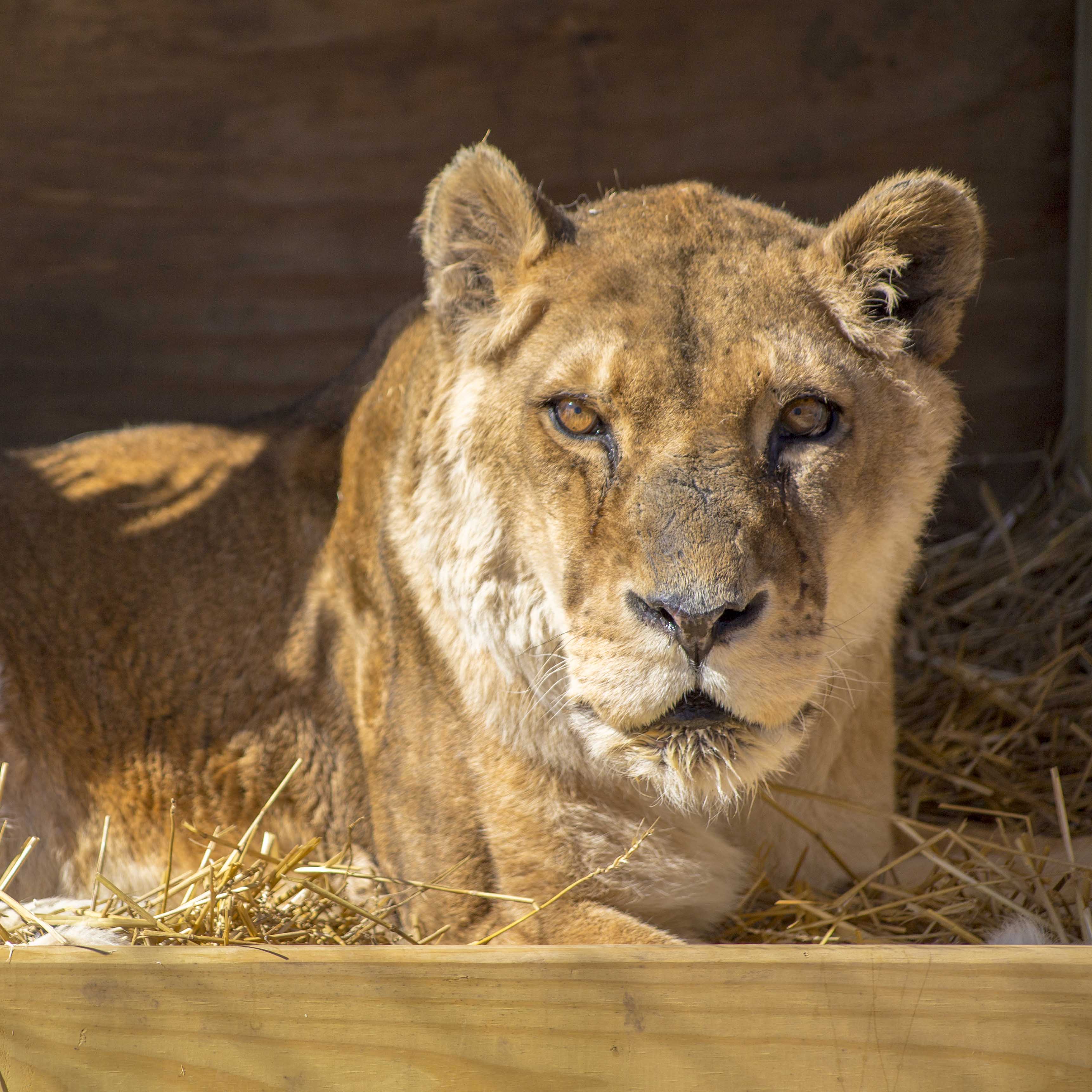 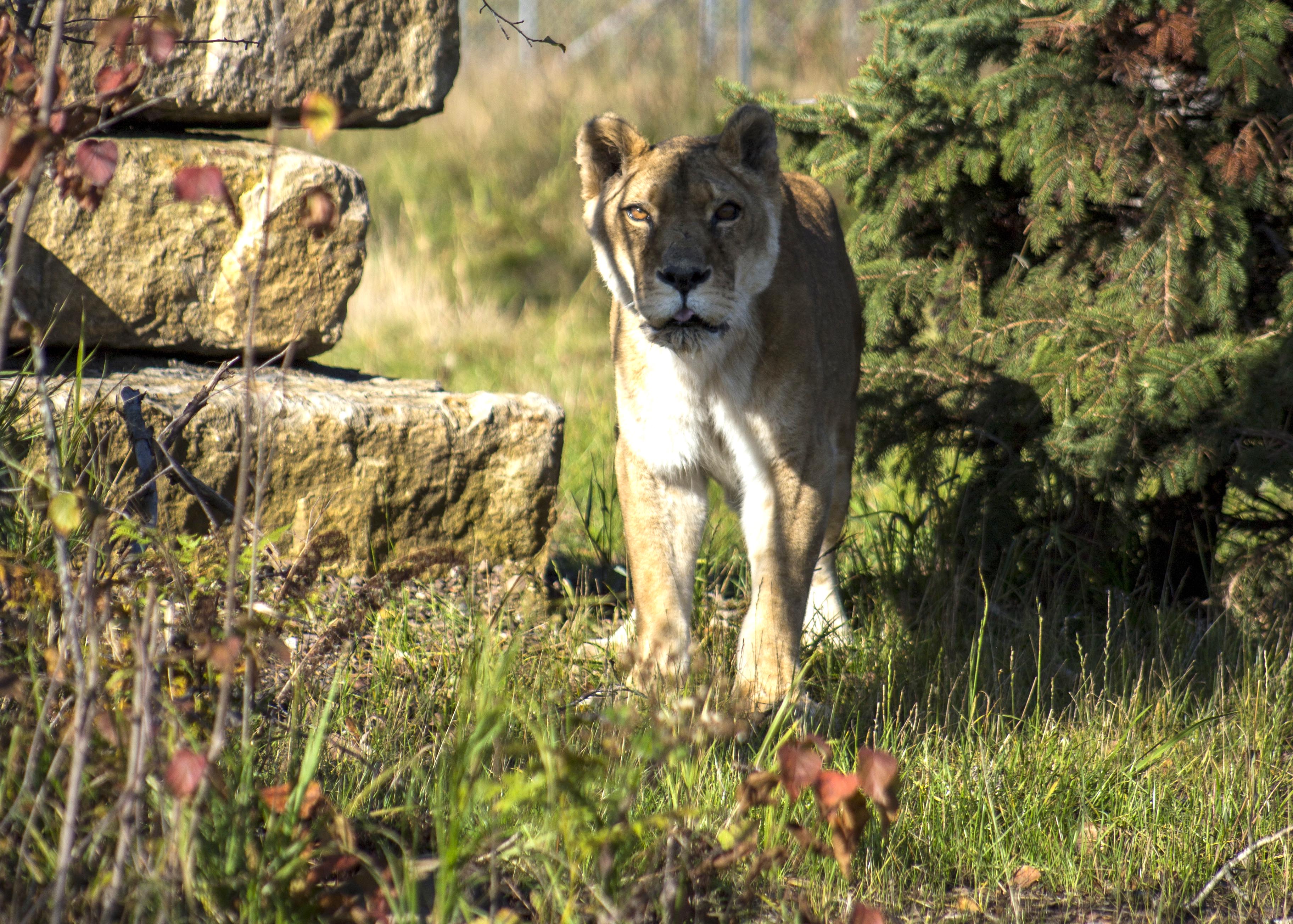 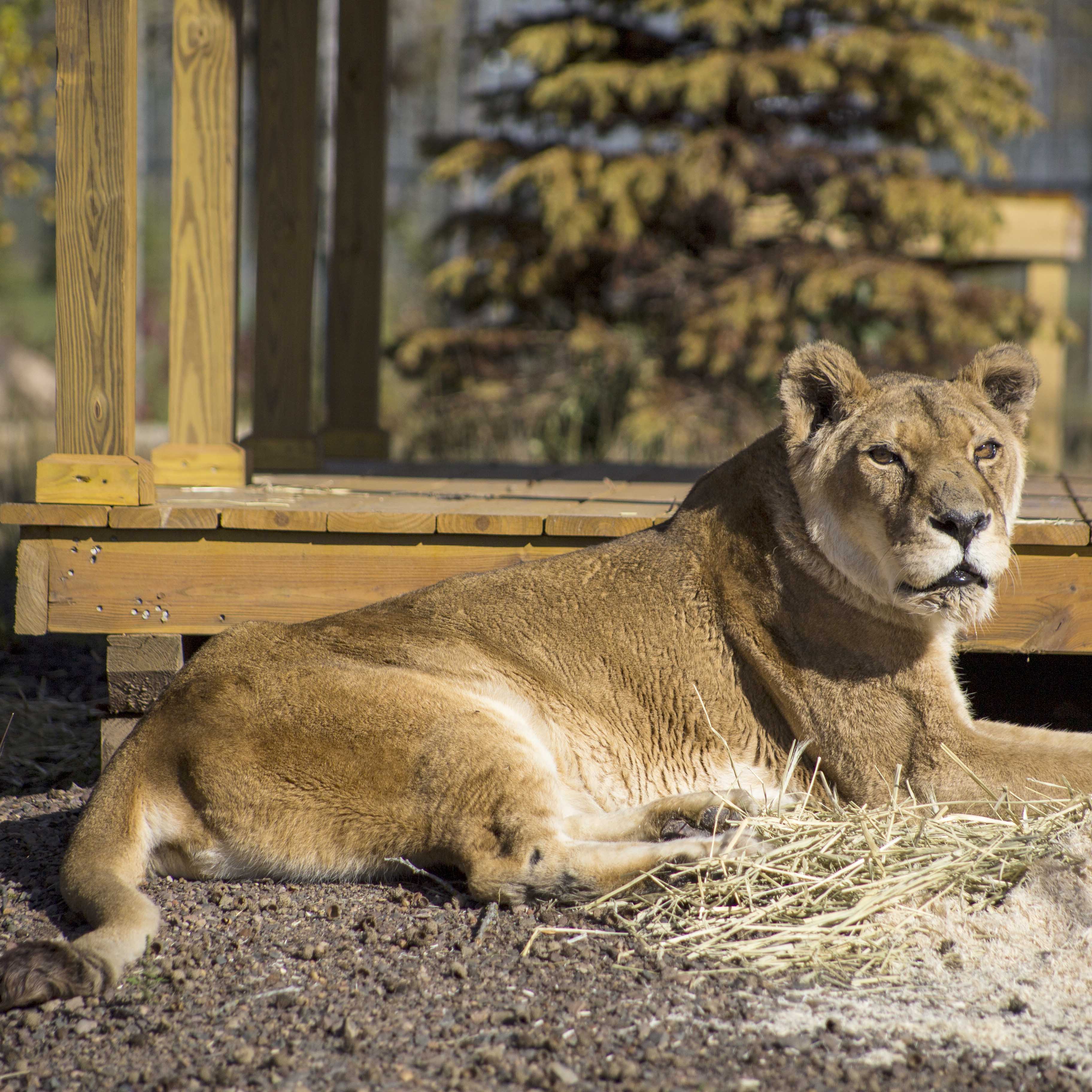 Salteña’s a female lioness who arrived at the sanctuary in 2018. Though records on her birth aren’t clear, it’s estimated she was 26 years old when she came to us. She and six other lions made the long 6,000 mile journey to Minnesota from Argentina. 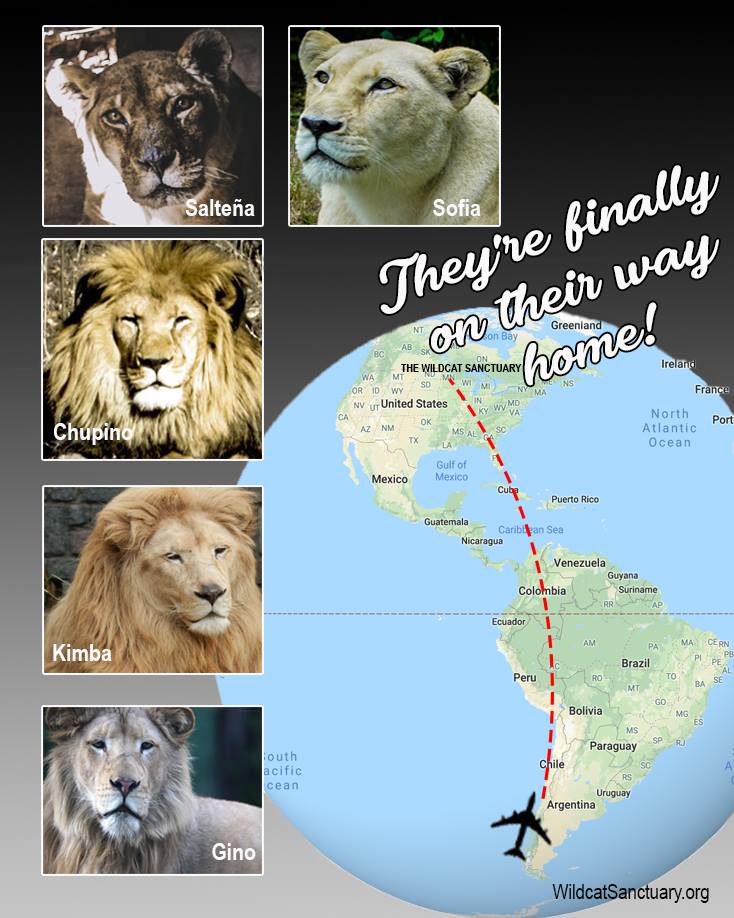 We were told Salteña spent her life living in a circus transport cage with her mate. The circus had abandoned them in 2011, leaving them starving and dehydrated. Authorities placed them at the Mendoza Zoo in Argentina.

An animal welfare group in Argentina later reached out to us, asking if we could take in the last two remaining lions from the Mendoza Zoo. Thirteen other lions had already died at this very old zoo. Animals weren’t spayed or neutered, so thousands were in cages there. Some had already escaped, roaming the zoo grounds.

Since there was only one outside area there for the lions, Salteña had been sharing it with the last male lion, Chupino. When he was outside, she was inside a small, dark cage in the mountainside. We knew, at her advanced age, transport would be very risky. But we just had to give her this last chance to have the life she dreamed of.

We held our breath as the transport truck doors opened. We had two veterinarians on hand to deal with whatever Salteña needed. Well, were we ever surprised when she let out so many roars letting us know she’d finally arrived!

Today, she enjoys her comfy straw bed more than anything else. She has one inside and one outside, whichever she prefers. And, though Chupino is totally smitten with her, Salteña calls the shots with him. She’s a very confident lioness!

To see her so content now, after so many years of neglect (the first two photos above), is the greatest feeling in the world!

If you’d like to become Salteña’s sponsor parent, that would be such an amazing thing to do for this special lady. As our oldest resident, Salteña requires medications and supplements to help her live comfortably. A one time donation toward her care would also be very helpful.

If you’d like to do either, simply use the buttons above on this page. Thank you for caring about her welfare, too!

Yes, we knew this day would come, but it’s even more difficult than I’d imagined.

At 27, we had to help our Lady Salteña pass on to her new wild life.  One free of bars, free of concrete and free of confinement.

Salteña’s life was far from a fairy tale. In fact, it was quite the opposite.  She experienced a life no wild animal should ever  endure.  She’d been used for years as entertainment by a traveling circus in Argentina. She spent her life in a tiny, rusty crate on wheels, barely able to stretch her legs.

She suffered malnutrition, hunger and metabolic bone disease.  Her teeth were broken and rotten from a poor diet and 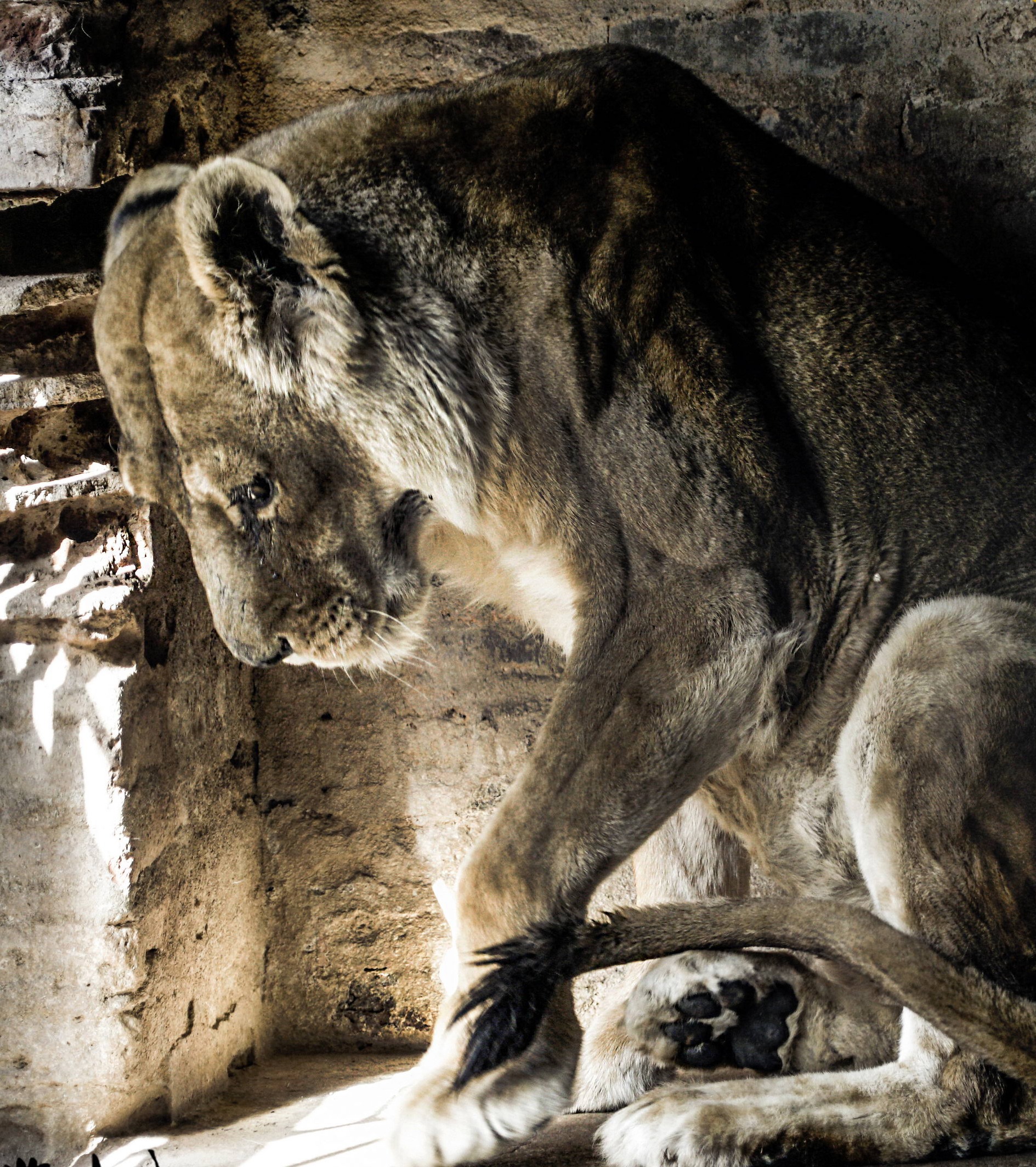 chewing on the bars.  Eventually, she was rescued by a zoo.  Though better, she still didn’t have grass under her feet. This zoo had limited resources and had been closed.

I remember being asked if it was the right thing to try and move an old geriatric lioness literally across the world.  In many cases, I would’ve said humane euthanasia was the better option. But that wasn’t even an option for her.

The zoo had been closed for several years. Sadly, that might mean she would pass away in her cage, as others had already done.  I refused to let that be her fate.  We knew it would be risky, but we had to try.  We had to show her what life could be like.

During transport, I was contacted in the middle of the night that Salteña wasn’t doing well.  They were sure she was in emergency distress. Luckily, they just didn’t know Salteña.

At her age, she had some vision and hearing issues, which meant she slept very soundly. It was difficult to startle her and she was having vivid dreams – the one way she could live the life she wanted.

The moment she arrived, we heard her strong roar and protest of being in the crate.  It was music to our ears. Salteña’s spirit was as strong in person as we’d felt across the continents. She was in charge spiritually, even if humans had physical control over her her entire life.

If you ask me again, yes it was worth the risk.

At the sanctuary, Salteña finally was able to bask in the sun and loved her soft straw-filled beds. She enjoyed the most freedom she’d ever experienced in her life….until today. 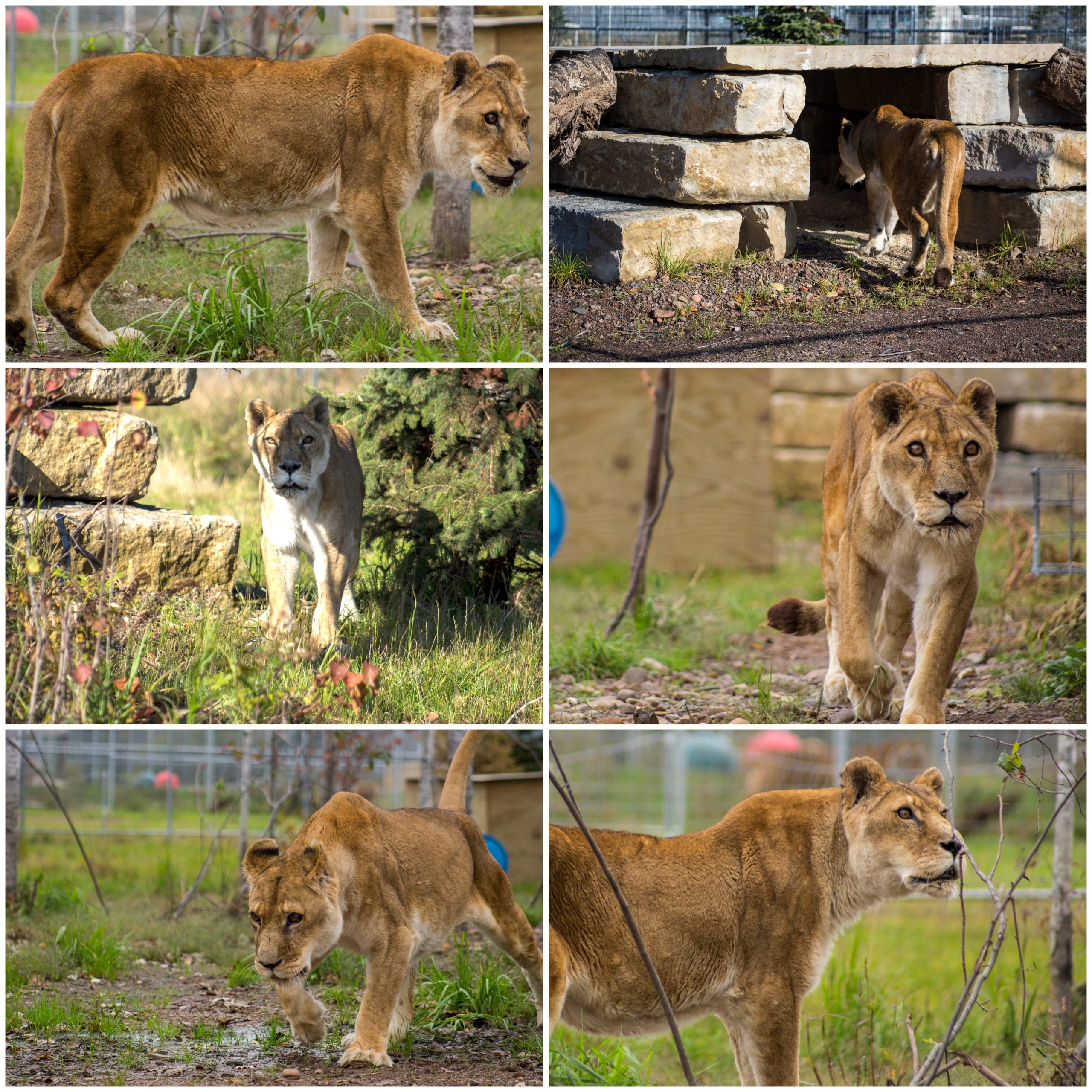 Her move wasn’t the only risk we took with Salteña. As soon as she and Chupino arrived, we knew how smitten he was with her.  Living together on shared walls in Pride Prairie, you could see their relationship grow. But you could also see Saltena was alpha.

We talked about the pros and cons of allowing them to be together.  We knew if one bad move took place, that could end Salteña’s life.  Even if Chupino was just playing.

Late this past summer, we began noticing Salteña’s decline.  Before she was compromised any further, we made another risky decision. We allowed her to be with Chupino for the afternoon, together in their large habitat.

As much as we planned, we knew this could be dangerous for her. We kept this special day quiet, not to hide the moment, but to cherish it as much as possible.  It’s a day imprinted in my mind and one I’ll never forget.

They had some very peaceful moments. But true to Salteña, as well as lion behavior in general, she wanted to assert herself. Chupino tried his best to let her, but he also had to defend his honor. This is normal and typical behavior – we’ve seen it with all big cats during introduction.

But it took a lot out of Salteña – she was exhausted.  They did get to share a very special afternoon in the same space – a truly magical day.  After we separated them, they went back to being best friends, separated by fences.

They both seemed much more comfortable that way – they didn’t have to keep their guard up.  And could just spend the rest of their days together the way they had for so many years.

Chupino knew her time was here before we did.  We were still hopeful supportive care would help her. Saying good-bye was difficult, but not as difficult as her previous life had been.

Today, we’re setting up a memorial fund in Salteña’s honor. If you’d like to remember her this extra special way, you can give HERE.

It will be used to care for our residents but, more importantly, to help fund those still in need.

Salteña lived in a barbaric circus, then a closed-down zoo, and wasn’t rescued until she was 26 years old.  This shouldn’t have to happen to any other lion, tiger or wild cat ever.

I hope you’ll remember this special lioness by donating in her memory, helping prevent others from suffering the same fate.

We’ve treasured the last 16 months we’ve had with Salteña. And we were honored to provide her this last peaceful year of her life, alongside Chupino. 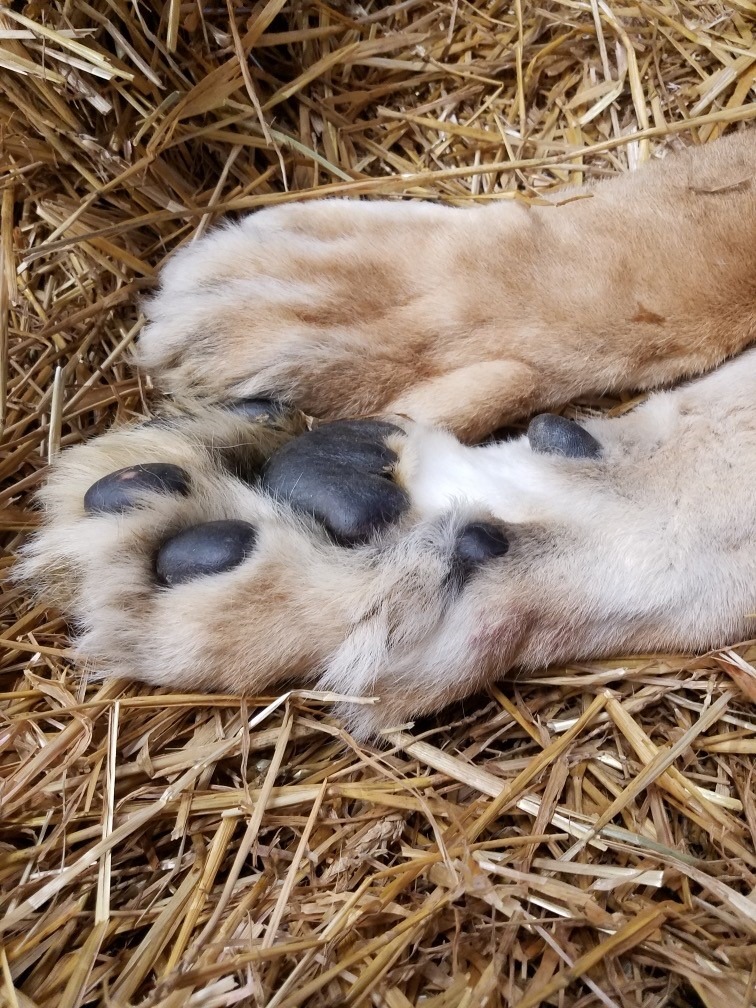 They transfer abandoned lions in Salta to the Mendoza Zoo

News of:  They are two adult specimens, a male and a female. At the moment of being rescued from a circus by Ambiente, their sanitary status was bad, since they presented cachectic, with loss of muscle mass and strength. 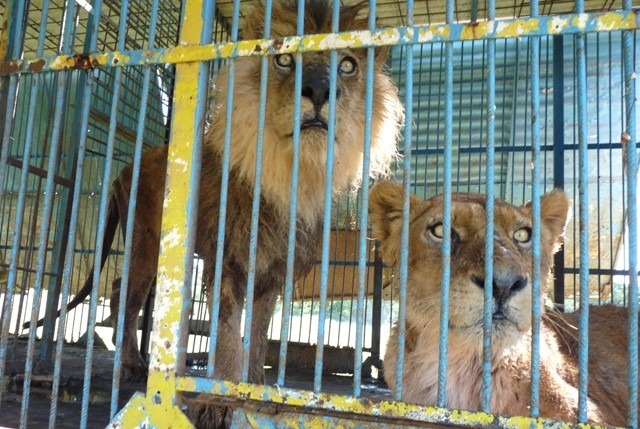 At the end of March, the rescue of two African lions that had been abandoned by the circus owners Hnos. Reyes in the town of Río Piedras.

The circus did not have the documentation that accredits the possession and that allowed the mobilization of these exotic species, as the law indicates. Given this situation, the Ministry of Environment contacted several institutions, at the national level, that could be interested in receiving them and that would have the necessary conditions. Subsequently, it was determined that the Mendoza Zoo, which had the place and adequate facilities to house these specimens, could receive them.

The lions were treated with great care and, when they were transferred to the cages that would take them to Mendoza, meat was used as bait, in this way the sedation of the animals was avoided, moving them in a more natural way.

From the Mendoza Zoo, Oscar Ríos informed that the trip was quiet and that the cats are already in that establishment in quarantine period, that is forty days apart to avoid or limit the risk of spreading a certain contagious disease, so that his condition will be evaluated through the checks and diagnoses that Mendoza professionals will perform.

They are two adult specimens, a male and a female. At the moment of being rescued by Ambiente, their sanitary condition was bad, since they presented cachectic, with loss of muscle mass and strength; Many regions with alopecia (hair loss) and abrasions were observed on the skin. The trailer in which they were, was in poor condition of hygiene and did not have a drinking fountain.