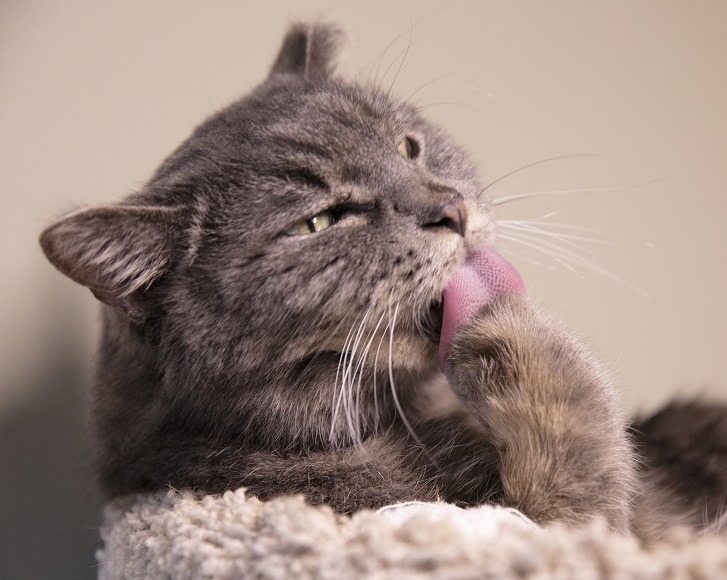 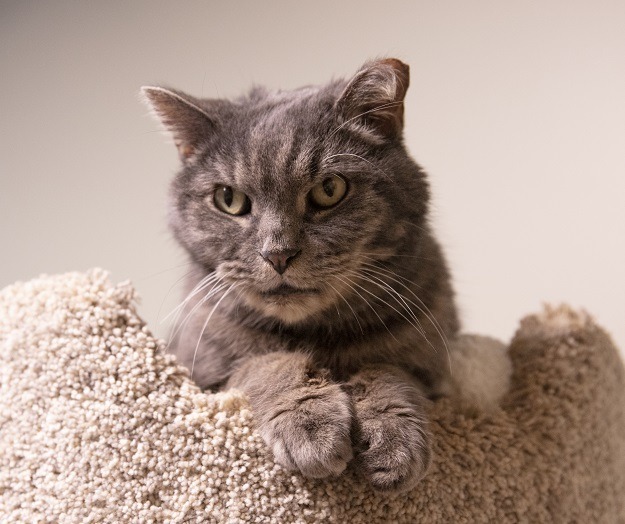 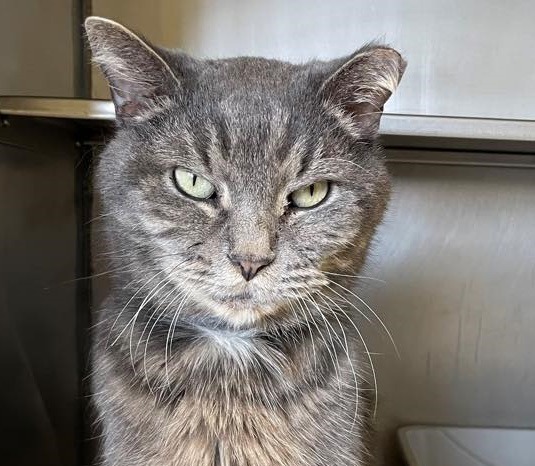 Edgar is a male gray domestic tabby cat who arrived at the sanctuary in April 2022. He had been found as a stray at 16 years old. Edgar was then turned into animal control and the person who found him thought he’d been abandoned by a tenant of an apartment building.

This poor old guy seems to have had a bit of a rough life. When he arrived at animal control, he was already neutered. His left ear was tipped, which is often done for trap and release programs.

He was congested, but never developed any ocular or nasal discharge. In case he had developed an upper respiratory infection, he was started on antibiotics. Edgar also showed mild matting throughout his coat, likely due to decreased grooming because of his age and congestion. His bloodwork showed that he has kidney disease, too.

Being an older cat, he’ll receive a dental exam, too. He has some teeth that appear to be missing, heavy tartar, and some gingivitis.

Right now, shelters and animal control are full due to the influx of Spring kittens and cats. We knew Edgar had few options due to his advanced age.

The animal control staff said he had perfect litter box habits, was non-reactive to other cats, and was just a sweet, sweet old man.

Life At The Sanctuary

After hearing his story, we decided to dedicate an office space for Edgar so he could have a home the last few years of his life. This would also help save another cat by opening up much-needed space at the shelter.

Edgar arrived very vocal indeed! He announced his arrival to everyone as we transported him in his carrier to his new office home. Little did we know then, Edgar is actually deaf!

But he was immediately so excited to greet everyone, rubbing, purring and drooling with pleasure. He absolutely adores being pet and wants company all the time. It’s so heartwarming to see a cat express their utter delight being valued for who they are.

We hope to make Edgar’s final chapter his absolute best!

As a geriatric cat with many issues, we know we’ll be facing medical costs. Our sponsorship program helps with that and supporting the Edgar’s care costs. You’ll be able to form a special bond with him, too if you consider becoming Edgar’s sponsor parent?

Thank you for caring about the little ones in need, too!