Residents In Memory Yuma – In Memory 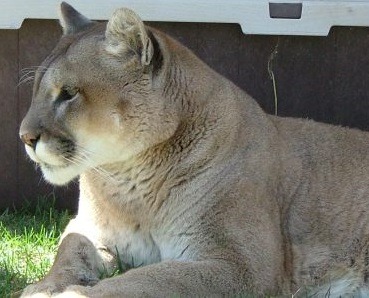 Yuma is a 10-year-old cougar who resided at a safe haven sanctuary in Colorado. The sad part is, the sanctuary was not receiving enough funding to continue caring for the animals. The Director made the very difficult decision to begin placing animals at other facilities in order to ensure they received the proper care. It must have been so humbling to have been faced with such a decision.

Upon arriving at TWS, Yuma was sedated for a full physical. Sadly, we soon realized that Yuma had been declawed on all four feet and she had regrowth where the nails were growing back into her pads with some bones exposed.

Usually, we could make the decision to correct this, but Yuma’s declaw was not done by a vet. Most of her digits on her feet are crushed beyond repair. Amazingly, Yuma seems to have little pain. She can be seen chasing an empty milk carton or large Easter egg, both forms of enrichment, across her enclosure.

She is also one of the most vocal cats on our property and calls out like a goose whenever she sees a keeper or visitor.

Yuma , a 12-year-old cougar has passed. Two months ago, keepers noticed Yuma becoming increasingly lethargic. It was during this time that she stopped eating.

Initial x-rays showed a blockage. With the removal of about 1-2 pounds of hay from her stomach, we hoped she would be on her way to a full recovery. It was unlike Yuma to eat anything other than her staple diet. Staff believed it may have been something more serious.

She was kept in quarantine after her first surgery where she was the best patient a vet and keeper could ask for. Unfortunately, she still wouldn’t eat. We kept thinking it was her time, but she kept fighting and clearly communicating that it wasn’t.

She had two more x-rays and after the second, our veterinarian decided to perform surgery again. She had two spleens, or a split spleen (she should only have one) and a stretched pancreas. The spleens were removed, since she wouldn’t need them to live a healthy life.

Staff and vets believed this to be the reason why she was uninterested in food. Just a day after her surgery, she began eating every last morsel of food again. We felt optimistic she would have a successful recovery.

Up until the past couple days, she didn’t skip a beat. She was her loud, cheerful self and could often be found reminding her habitat-mate, Raja, that she was boss.

We are sad to say that the tough little girl had relapsed in the past couple days. TWS staff immediately responded to her lethargic behavior, and sought medical treatment.

Beautiful Yuma unfortunately lost her fight, and staff helped her pass comfortably. She is now in a place with a fellow friend Cooter, where she is her vocal self, playing with her basketball.