The Truth About White Tigers

What is a white tiger – really?

White tigers are very popular with pseudo sanctuaries, breeders and exhibitors as they tend to bring in more visitors and more money. White tigers are Bengal tigers. They’re not albino or their own separate species, as many people think. White tigers occur when two Bengal tigers that carry a recessive gene controlling coat color are bred together.

It’s been said the entire captive white tiger population originated from one single white tiger and has been inbred ever since. In order to retain this recessive gene, zoos and breeders must continually inbreed father to daughter and father to granddaughter and so on. This inbreeding has caused many genetic problems with tigers such as cleft palates, scoliosis of the spine, mental impairments and crossed eyes. Many of the cubs that are born either in zoos or by breeders have to be ‘disposed’ of because they are malformed at birth.

White Bengal tigers have also been crossed with Siberian tigers to produce a larger specimen which in turn causes even more genetic problems. For years, breeders and exhibitors have been using the excuse that white tigers are an endangered species so they need to keep breeding them. This is completely false. Breeders of white tigers do not contribute to any species survival plan; they are breeding for money.

In reality, the breeding of white tigers compounds the problem by giving the general public a completely incorrect image of these powerful wild predators. It’s also caused a giant surplus of normal golden-colored tigers in the private sector worldwide since most litters have several unwanted golden tigers, too. Out of a litter of cubs, the breeders will pick the white cubs that bring in a lot more money on the market and euthanize, inhumanely destroy or neglect the cubs that do not meet the color requirement.

You can read the June 2011 AZA White Paper declaring the practice of breeding white tigers as “not in adherence with AZA’s Board-approved Policy on the Presentation of Animals” HERE.

Sierra came with Ekaterina, another tiger, as part of a big cat rescue from Wild Animal Orphanage once it closed down. 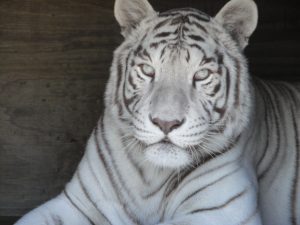 They originated from an exploitative breeder in Ohio. It took the combined efforts of the USDA, undercover agents and concerned citizens seven years to shut down the Siberian Tiger Foundation. This breeder charged the public to pet adult lions and tigers that were declawed and chained down to a platform. During this time, the USDA investigation included eight allegations of attacks on visitors in an eight month period.

Once the facility was closed down, Joseph and his lion pride were placed at Big Cat Rescue of Florida. The Wildcat Sanctuary offered to take the remaining tigers, Ekaterina and Sierra, but they were transported to the Wild Animal Orphanage (WAO) in Texas with funds from IFAW instead. In 2010, WAO was forced to close its doors. Life came full circle for Sierra and Ekaterina  when they finally arrived at The Wildcat Sanctuary. The two girls are doing wonderfully. Sierra especially loves her tug toy and lounging all day in her fire-hose hammock.

Sierra and Ekaterina, two Bengal tigers are featured in a 20/20 news story about the dangers of animal exhibitors. This story, along with the video, gives us a glimpse into the past of Sierra and Ekaterina and all they have had to endure. They are wild animals and it is a real shame that they were forced to be anything but that.